Diseases That Ozone Therapy is Used For

DISEASES THAT OZONE THERAPY IS USED FOR

There are billions of cells in our body and about 5000 of them forward to being cancerous every day.   However, immune system of the healthy people detects these differentiating cells and destroys immediately just like to smash the snake head when it is small.  We owe much to our immune system which does not detect the germs coming from outside only, but also perceives the cell differentiations inside for protection from the cancer.  Therefore, predisposition of people whose immune system is weak or collapsed to infections as well as they may have cancer easily.  Unfortunately side effects of the cancer drugs actually provide this.  Drugs which are given to kill the cancerous tissue (which also damages to healthy body cells, suppresses the immune system by depressing the main source of our immune system such as the bone marrow and effects our body during the fight against cancer) becomes us more sick than the cancer does.  If such drugs given to our body is administrated with higher doses, they may cause death. Unfortunately, every cancer case does not benefit from chemotherapy and it may worsen by this treatment called chemotherapy.  When we have cancer, we refer to an oncologist (cancer specialist) and start the recommended treatment (chemotherapy or radiotherapy).  Because we do not have any other treatment form which is less harmful.  However, it should be noted that ozone therapy which may remove side effects of the cancer therapies and used as an additional treatment for cancer may be benefited.   Ozone therapy and cancer disease comply with each other like hand and gloves.  Ozone therapy does not have any side effects as well as it provides cancer patient to continue on chemotherapy and radiotherapy by creating decreases on complaints such as collapse of the immune system, exhaustion, tiredness, severe nausea and vomiting, loss of appetite by almost 80%.  It causes to feel better and facilitates your adaptation for the treatment and also causes breaking of the cancerous tissue by demolishing nutrition of the tumour cell due to floating the tumour tissue in the oxygen and providing increase of the enzyme called TNF (tumour necrotizating factor) and provides a more successful cancer treatment.  But, unfortunately, this complementary therapy form is not recommended for the cancer treatment as it is not examined by our oncologist sufficiently or not known and they may deprive people from this important additional treatment.  People may have oxygen insufficiency for many reasons.  For example, exposure to air pollution for a long time, smoking, immobile life, stress, lung and heart diseases, inappropriate foods, not breathing deeply and insufficient exercise.  Dr. Otto Warburg who was awarded by a Nobel prize indicates the life without oxygen as an actual reason for cancer in his study which has brought the Nobel prize twice. According to Dr. Warburg, oncogens within the body may start the cancer by combining with factors such as inoxygenation as well as stress, pollution and radiation.  Namely, oxygen insufficiency is an important factor which is considered as a cause for the cancer. Dr. Warburg has used such phrase that “only and final reason for the cancer is anaerobiosis (life without oxygen)”.  Normal cells need oxygen, but cancer cells may survive without oxygen. Dr. Warburg showed that normal cells which have been taken from any embryo have started to get characteristics of cancer cells when they are forced to live without oxygen in a laboratory tube.   When cells are deprived from the oxygen, they may return to the most primitive period and it is known that when they start to receive their energy from sugar instead of the oxygen like normal plants and animals do, their cell nature starts to spoil and have a transformation through cancer.   Rapid reproduction of cancer cells requires a very high amount of glucose (sugar) and they convert the glucose into lactic acid.  When acidity of the body increases, oxygen use of the cells become more difficult.  According to the same oxygen insufficiency theory, because the cancer cells can not survive within an environment which is rich in oxygen; it has been detected that if sufficient oxygen is provided, nutrition of the tumour tissue is spoiled and tumour cells die.  Oxygen insufficiency facilitates diffusion of the cancer.  Swedish scientists have shown that cancer cells escape from oxygen insufficiency within the origin tumour and try to settle, diffuse on other sites.  In a recent study performed in Tübingen University, Germany; a rapid recovery has been proven in the cancerous tissue by exposing the cancerous cells into a oxygen bombarding.   After these scientific studies, importance of the oxygen has been understood to treat and prevent the cancer and ozone (superoxygen) treatment has gained importance. DR. BAŞAR ŞENYÜZ

Patients with Diabetes Mellitus are the patients who benefit from the ozone most.  Ozone reduces the blood glucose by increasing the entrance of the blood sugar into body cells and tissues.  Patients with diabetes may need drug reduction after the ozone therapy by virtue of performing the tasks expected from insulin by the ozone.  Ozone therapy prevents formation of cataract, microangiopathy and neuropathy on eyes of patients with diabetes; is useful by preventing formation of glucosaminoglicans which cause joint problems.  On the other hand, it effects by strengthening the immune system and removing the infection agents against infections which may develop in patients with diabetes easier.

Ozone therapy and Ant-aging;: of course there is much to do against the aging. To move much, to eat less and to be away from the stress come first.  There is another valuable method which resist the early aging.  Ozone therapy.  Aim of this method is to protect the youth energy for long years, to stay vigorous and to create a resistance against the diseases.  With the ozone therapy, better use of the oxygen by the tissues is provided; cell renewal increases, immune system gets strong and antioxidant system of the body is activated against free radicals which causes aging in the body.  To have a strong antioxidant system is the basic requirement for oxygen depended lives.  Because everything that we intake into our body have a waste and these waste substances convert into substances called free radicals which wear and age our body.  Ozone therapy protects our cells and us from early aging by both detoxification effect and strengthening the antioxidant system.    Our cells also ventilate just like humans.  For this, it is essential to have oxygen molecules within the cells.  Cells and tissues which can not be oxygenated sufficiently due to smoking, not breathing correctly, aging and atherosclerosis due the aging may perform their functions with a higher rate after the ozone therapy.  Persons who have received ozone therapy have wellness and they feel themselves renewed.  Because of positive effects of the ozone therapy to the brain and blood circulation, rapid recovery is observed for the cases such as decrease in the physical capacity, dizziness, chronic tiredness, memory weakness.  By increasing effects of the blood circulation on the skin and presence of oxygen more, the skin id fed from inside and skin tightness increases like a skin of a young person and the skin shines healthily due to cell renewal.  It is known that ozone therapy has anti-aging effects as well as increases the life quality. DR. BAŞAR ŞENYÜZ

Rapid increase of the elder population has caused appearance of many rare diseases commonly.  Nutrition habits changed, dramatic disruption of daylight-dark cycle, life of the modern people covered by anxiety and concerns have prepared a basis for incidence increase of diseases such as dementia and Alzheimer.  Alzheimer is a progressive brain disease that practices performed many times during the daily life such as recognizing people, problem solving and various mental functions weaken in time, ability to perform daily works decreases and various behavioural disorders may be seen.  Alzheimer disease has been defined by German physician Alois Alzheimer in 1907 first and it is known as "dotage" within the public.  The disease occurs by disappearance of the cells on some areas of the brain with unknown reasons.  Thus, Alzheimer’s disease is characterized by decrease in daily life activities and corruption on cognitive abilities and neuropsychiatric symptoms and behavioural changes accompany and progresses with neural damage; and it is the most common type of the dementia.  Alzheimer’s disease occurs earlier death of brain cells than programmed with an unknown cause yet.  Brain cells decrease in al people by age and they are not renewed.  This process in Alzheimer’s disease is very rapid and early.  The brain starts to shrink and gets smaller by cell death.  Unfortunately, a big progress could not be achieved for treatment of this disease of which the cause is not known.  Drugs used common for the current treatment (cholin esterase inhibitors etc.) may slow the process in patients.  Also, drugs to increase the cerebral blood flow are used with these treatments.  Oxygen radicals and oxidative stress mediating to the nerve cell damage arisen in Alzheimer's disease reminds that patients may benefit from antioxidant vitamins (B, C, E).  Because the ozone therapy both increase the cerebral blood flow and supports the defence system of the body against the oxidative stress alights as a hope light.  Combination of the ozone therapy with melatonin that patients with Alzheimer’s disease use as an antioxidant support in USA may be useful for many patients.    Almost none side effects of both ozone therapy and melatonin also encourages to use these treatment methods.  The ozone therapy which is not known in common for Alzheimer’s disease and dementia that the treatment has not been suggested and melatonin administration as antioxidant have a big benefit potential. Associate Prof. Dr. Ahmet KORKMAZ 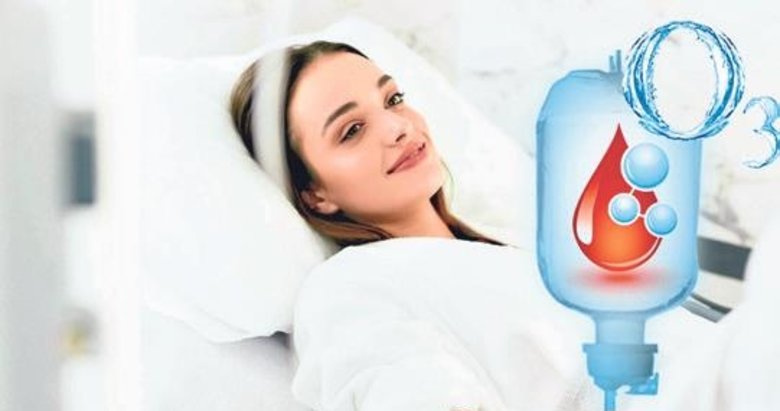